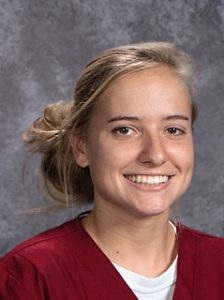 The Indiana Basketball Coaches Association recently announced its 2019-20 Academic All State Basketball Team.  The IBCA Academic All-State team is a program where academic prowess and athletic prowess both are considered in the selections. Items such as grade-point average, college board scores, and academic class rank are considered along with athletic performance in areas such as points per game, rebounds per game and assists per game.

Senior recipients must play at least 50% of their schools’ varsity games and have at least a score of 1100 on the SAT or a composite 24 on the ACT.  Players must also carry a grade point average of 3.50 or higher and rank in the upper 25 percent of one’s class.  Receiving IBCA Basketball All State Honorable Mention was Bremen’s Bailey Vermillion.  Congrats Bailey!

Click the following link for all 2019-20 IBCA selections:  Academic All-State