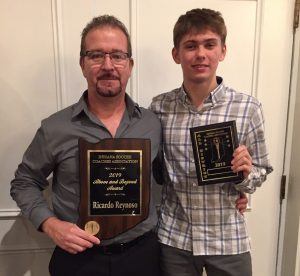 The Indiana Soccer Coaches Association recently held their annual awards program at the Ritz Charles in Carmel.  The event was attended by over 850 players, parents, coaches, and family members.  The ISCA banquet is one of the largest high school awards events in the nation and Bremen High School was represented by Collin Moren and Ricardo Reynoso.

Moren played in the State Showcase games at North Central High School on Saturday and Sunday on a team of juniors and seniors representing District 1 in the showcase games.  There are only 4 districts in the state and only 22 players represent their district at the showcase games each year, with Moren becoming only the third Bremen player to achieve this honor.   Moren and his teammates finished the weekend with a 2-1 record and he was able to score a goal and add an assist in their third game.

Ricardo Reynoso, Bremen Boys Soccer Assistant Coach, was honored by ISCA president Greg Davidson with the Above and Beyond Award.  The award is given to a single coach in the state who does exactly what the award indicates by going above and beyond the call of duty.  The following award excerpt was written by Bremen Boys Soccer Head Coach Mark Yoder:

Ricardo Reynoso has served the Bremen Community as a youth and/or high school soccer coach for over two decades.  Coach Reynoso has been actively involved in training many of our youth teams and has also been heavily involved in training our players (especially the goalies) at the high school level for over a decade (both boys and girls).  He has an incredible servant’s heart and is always willing to work with individuals beyond practice time.  Level of experience doesn’t matter at all to Ricardo; he is willing to work with players at all levels and abilities and is an expert at getting the best out of each individual he is training.  He has the right combination of toughness and tenderness that allows him to push our student-athletes to better themselves, but communicate with them on a personal level.

One of the most prominent impacts Ricardo has had on our soccer programs is forming a positive relationship between our school and the Hispanic/Latino community in Bremen.  Ricardo has worked diligently to help families understand the importance of education-based athletics and the opportunities they can provide to our community.  He has often met one-on-one with parents and students to help with communication and bettering understanding of team expectations, eligibility rules, and other important aspects of high school sports.  He is a firm advocate of participation in the community through school programs and his children are great examples of this.  Both of his sons played for Bremen and his daughter is currently playing.

One of the best ways for me to describe Ricardo is his automatic response to any team need’ “Let me do it coach.”  No matter what needs to be done, when it needs to be done, Ricardo will always volunteer to make it happen.  He never seeks any type of recognition, but is a relentless servant behind the scenes.  I am humbled to have such an amazing example of a father, husband, and coach working on our staff.

Congratulations to both Collin and Ricardo!