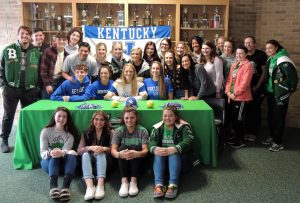 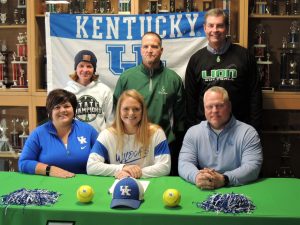 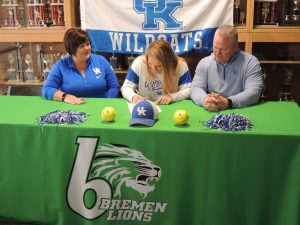 Erin Coffel has signed a letter of intent to attend the University of Kentucky located in Lexington, Kentucky, where she will play softball for the Wildcats.

Erin helped lead the Lions to a sectional title as a freshman, a state runner-up finish as a sophomore and a state championship this past season.  For her career, Coffel carries a batting average of .627 with an on-base-percentage at .702 and slugging percentage of 1.388.  In her 339 plate appearances, Erin has an astounding 168 hits, 191 runs, 164 RBI, 36 doubles, 9 triples and 50 home runs.  As a sophomore, Coffel broke the Indiana state record for home runs in a single season with 22 and is currently the career leader with her senior season yet to be played.  On the base paths, Erin has 47 steals in 49 attempts while playing for the Lions.  Coffel has only struck out 12 times……in her career while being walked an unprecedented 64 times.

The Indiana Softball Coaches Association has made Erin a 3-time All-State selection.  The Northern Indiana Conference, the largest in Indiana, named Erin their Most Valuable Player for the past two seasons.  In addition, MaxPreps selected Erin as a 2019 National High School Underclass Softball All-American making her one of only eleven infielders in the country to receive this exclusive honor.  The ALL-USA High School Softball Team honored Erin with her selection to the All-USA High School Softball 3rd Team placing her among the most elite players in the country.  Erin was the only player from the state of Indiana to be honored by USA Today.

Recognized as one of the nation’s most elite high school athletes for not only athletic excellence, but high standards of academic achievement and exemplary character, Gatorade selected Erin as their Softball Player of the Year for the state of Indiana  With this honor, Coffel became a part of a 30+ year legacy that includes past winners such as Peyton Manning, Abby Wambach, Karl-Anthony Towns, Derek Jeter and many other sports icons.

Academically, Erin carries a 3.826 GPA ranking 8th in her class.  She plans to study kinesiology at UK.  Congratulations Erin!

Bremen Head Softball Coach, Mike Huppert stated, “Erin is a coach’s dream.  She works very hard at fundamentals and asks for additional coaching to become the very best she can, is a pure leader on and off the field, and truly loves the game of Softball.  Erin’s work ethic is unmatched, taking extra reps hitting and fielding to prepare herself for any situation.  We are blessed to have Erin represent Bremen, and hope for nothing but the best in the future.”

Bremen Head Girls Basketball Coach, Alex Robinson, stated, “It has been an absolute privilege to coach Erin.  She has been an outstanding representative of Bremen both on and off the court.  Her leadership and commitment to excellence are truly unmatched.  She is the epitome of hard work and dedication paying off.  The Bremen Girls Basketball program could not be more excited to see her continue her softball career at the University of Kentucky. “