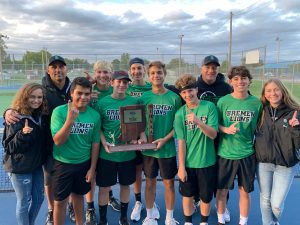 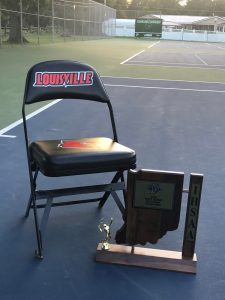 After upending perennial favorites Plymouth on Thursday (Plymouth Pilot article), Bremen Tennis claimed a sectional championship of their own on Friday with a win over John Glenn.  The Lion ended Plymouth’s 22-year stranglehold on the sectional tournament and captured their first championship since 2003 to go along with a 1st place finish in the NIC South.  Bremen advances to the Regional Semi-finals on Tuesday, October 8th and will face the host Culver Academy (IHSAA bracket).  If victorious, the Lions will play for a Regional Championship on Wednesday, October 9th at the Culver Academy.  Gentlemen – Good Luck at Regional!

During Friday’s sectional celebration, Bremen Tennis took time to remember and honor former, long-time coach Mark Wagner.  Coach Wags served as head coach for both the girls and boys teams at Bremen and was a constant presence since the program’s inception.