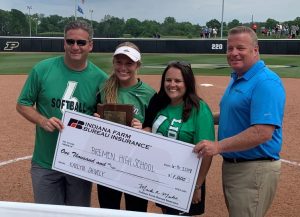 Moments after Bremen Softball celebrated a state championship win over Tecumseh, there was another honor bestowed upon the Lions.  Members of the IHSAA Executive Committee announced Kaelyn Shively of Bremen High School as the winner of this year’s Mental Attitude Award in Class 2A Softball.

The award is annually presented to a senior participant in the state finals who best demonstrates mental attitude, scholarship, leadership and athletic ability and is nominated by her principal and coach.  Shively is a three-sport athlete winning 12 varsity letters in volleyball, basketball and softball serving as a team captain in each.

Academically, she graduated fourth in her class of 120 students with a 3.98 GPA. She has been a four year-member of the school’s broadcasting team at BTV and newspaper editor for two years.

She is the daughter of Steve and Holli Shively of Bremen, Ind. and plans to study audiology in the fall at Ball State University.

She is the third Bremen athlete to win an IHSAA mental attitude award, second softball player (Jenni Andrews 2008 Class 2A) and the first since since Abraham Hall won the 2012 award in wrestling.