The Gatorade Player of the Year program is proud to recognize the nation’s most elite high school athletes for not only athletic excellence, but high standards of academic achievement and exemplary character.  Gatorade has recently named Bremen’s Erin Coffel as their recipient of the Softball Player of the Year for the state of Indiana!  Erin is now part of a 30+ year legacy that includes past winners such as Peyton Manning, Abby Wambach, Karl-Anthony Towns, Derek Jeter and many other sports icons.  Click the following link for the official press release:  Gatorade POY

ERIN COFFEL HAS BEEN NAMED THE 2019 GATORADE INDIANA SOFTBALL PLAYER OF THE YEAR!
Erin helped lead the Lions to a Sectional title as a freshman and a State Runner-Up finish as a sophomore.  As a junior, Erin and her accomplished teammates currently find themselves in Saturday’s Semi-State tournament.  Statistically, Coffel is off the charts this season.  Her stat line reads like a video game:  .691 batting avg, on-base-percentage at .760 and slugging percentage of 1.543.  In 104 plate appearances, Erin has 56 hits, 66 runs, 47 RBI, 16 doubles, 3 triples and 17 home runs.  Last year, she broke the state record for home runs in a single season with 22 and is the career leader with 47 and counting.  Coffel has walked 21 times this season both of the intentional and unintentional intentional variety.  On the base paths, EB has 45 steals in 47 attempts while playing for the Lions.  Erin has only struck out 11 times……in her career (that’s over 300 plate appearances!)  The Northern Indiana Conference, the largest in Indiana, named Erin their Most Valuable Player for the past two seasons.  If not one for statistics or superlatives, pictures say a thousand words: 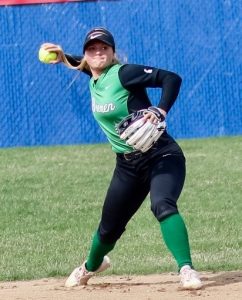 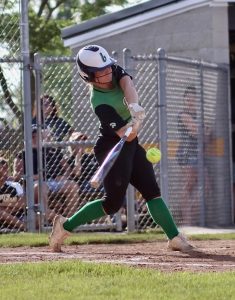 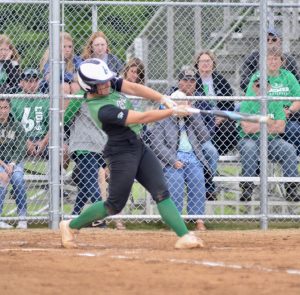 Erin is the ultimate team player without a sliver of arrogance or entitlement.  She is a better person than ball player and we are extremely proud of her on and off the diamond!  Erin is the daughter of Rob and Missi Coffel.

EB – OUR VERY OWN HOMETOWN GAL!