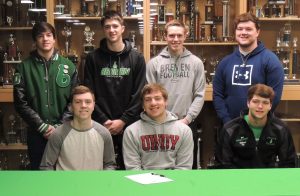 Jacob Wunder has signed a letter of intent to attend the University of Indianapolis where he will play football for the Greyhounds and study sports management or business.  As a senior, Jacob was named to the Northern Indiana Conference 1st team after selections to the NIC’s 2nd team as both a sophomore and junior.  Serving as team captain, Wunder led the Lions to a 2018 NIC South Division Championship and a trip to the IHSAA semi-state championship game after capturing titles at the regional and sectional.  Bremen finished their season with a record of 11-3 and a state ranking of #3 in Class 2A.  A 4-year letterman in football, Jacob has been recognized with Most Valuable Player honors for both the team and defensive unit.  Wunder was named to the Indiana All-State team by both the Indiana Football Coaches Association (IFCA) and the Associated Press.  He is currently a finalist for the 2019 IFCA North-South All Star Football game.  A 2-sport athlete, Jacob has also been a four-year member and captain of the BHS basketball team.  Congratulations Jacob!

Bremen High School Head Football Coach, Jordan Leeper stated, “Jake is a tremendous young man and football player.  His contributions to Bremen football go beyond his awards and statistics.  The examples he has set for a Bremen Football player will transfer to our younger players.  UIndy is getting a great football player and excellent young man.  We wish him the best and look forward to watching his success.”