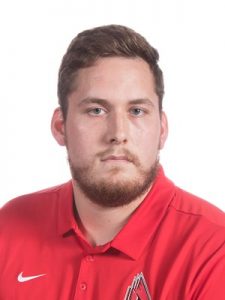 Ball State University traveled to Notre Dame on Saturday in what many believed would be a break for the Irish after their season opening victory against rival Michigan.  The Cardinals led in part by Bremen graduate Zac Ricketts had different ideas.  Zac gave the Irish all they could handle with both teams in position to win until the final minutes of the game.  Ricketts started at offensive guard for Ball State and anchored the offensive line the entire day in a near upset of the 8th-ranked Irish.  Coming in at 6’4 – 300 pounds, Zac was an imposing force in keeping the Notre Dame defense at bay.

A BHS graduate of 2015, the Lions went 35-15 during his high school football career claiming 3 sectional titles and a regional championship.  He was a 2-time All State selection by the Indiana Football Coaches Association.  A two-sport athlete, Zac captained the track team and was named Bremen’s Most Valuable Field Event Performer.  Majoring in Industry and Technology at Ball State, Zac carries a cumulative 3.487 GPA.  Great game Zac!  We are proud of you and all your success!