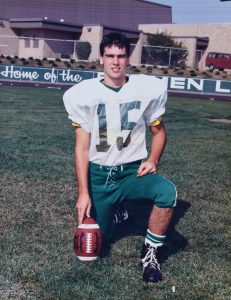 Bremen High School honors Wall of Fame inductee, the late Casey Miller.  A BHS graduate of the Class of 1989, Casey will be represented by Dorian Miller-Pfefferle and family at the Community Tailgate sponsored by Green Pride on Friday, October 5th starting at 5:00 p.m.  In his honor, members of the Miller family will be introduced to the homecoming crowd prior to a 7:00 p.m. kickoff of the Bremen-Jimtown football game.

Casey was a 3-sport athlete playing football, basketball and baseball leading the Lions to much success during his high school career.  The ultimate team player, Casey enjoyed a period of unprecedented tournament magic at Bremen High School.  Casey and his teammates claimed 8 sectional championships, 2 regionals crowns, a semi-state title and advanced to the 1988 Football State Championship game.  Casey was a 2-time All Northern Lakes Conference selection in baseball and was named the Most Valuable Player and Most Valuable Pitcher for the Lions.  An accomplished baseball player, Casey also exceled on the football field and was selected to the All NIC 1st Team.  In basketball, he was the ever-reliable teammate who performed his best when the game was on the line.  It is impossible to imagine Bremen athletics without recognizing the role Casey Miller played as an irreplaceable member of the Big Green Machine in the 1980’s.

Sadly, Casey Miller was killed in an automobile accident on his way home from a Bremen football game in 2003.  He was volunteering his time as a statistician for the team just prior to the tragic accident.  In his memory, along with Cary Jones and Chad Beeson who also lost their lives in the accident, the 3 C’s Foundation was established and has provided numerous scholarships to local student-athletes.  A son of Bremen, Casey will always be remembered for his love of community, athletics and friendship to all who knew him.