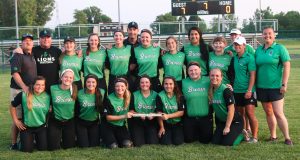 Bremen Softball ran their record to an impressive 26-3 on Saturday as they captured a Semi-State title with wins over Andrean and Tipton.  The bats continue to be white hot for the Lions producing 20 runs on the day while stellar pitching and stingy defense allowed only one opponent to cross home plate.  The Bremen faithful were in full force again at Newton Park.  Community members and alumni, including many former players, engulfed the playing field in a river of green for the championship game and again the Lady Lions did not disappoint.

Bremen Softball has enjoyed a storied history of success and this year’s tournament run marks the third time the Lions have advanced to the final four and the second time to the state championship game.  Former Coaches Chris English (Kuhl) and Stan Hueni were both in attendance on Saturday.  Chris and Stan coached the the Lions when they made their previous two trips to the state finals. 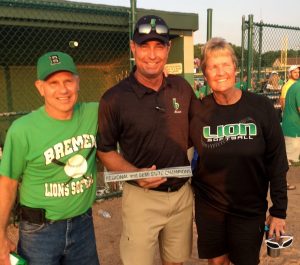 Only one step remains for Bremen to capture its first softball state championship.

Bremen will play the Speedway Sparkplugs (21-6-1) on Saturday, June 9th at Bittinger Stadium, Purdue University located at 1330 McCormick Road West Lafayette, Indiana 47906: Directions.  Click the following link for a campus map: Campus Map.   Traffic Note: Due to road closures/construction on McCormick Road south of the athletic complex, all attendees should plan to arrive using Cherry Lane from the east or McCormick Road from the north.

First pitch for the Bremen-Speedway Class 2A Softball Championship game is scheduled for 1:30 p.m.  Tickets are $10.00 and can be purchased at the Bremen High School Athletic Office beginning Wednesday morning at 8:00 a.m.  Fans are encouraged to purchase a ticket in advance.  Tickets are also available at the gate and everyone must have a ticket.   Bleacher and chair back seats are first come basis.  Lawn chairs and blankets are permitted in the outfield areas of the softball stadium.  Gates open at 9:30 a.m. and one ticket provides admission to all four championship games to be held on Saturday:

A school bus traveling to the game is being offered assuming there is adequate fan interest to ride.  Tickets to ride the fan bus are FREE!  Those wanting to ride the fan bus are asked to pick up a FREE ticket in the Athletic Office by Friday noon at the Bremen High School Athletic Office.   The departure time will be 9:00 a.m. on Saturday morning from the south parking lot on Grant Street.  The fan bus will caravan with the team bus to Purdue and then depart  following Bremen’s game at approximately 4:00 p.m.

Looking forward to a special Saturday with a large Bremen contingent invading Purdue.  Good luck to our Lady Lions and coaching staff!