This season marks the 40th anniversary since the lowercase “b” logo was first adopted to the helmet.  Back then, Bremen was the smallest school in the Northern Lakes Conference and often seen as the little brother of the NLC.  The Lions had to prove that they could play with the bigger schools and at times, succeeded. By the late 80’s, Class 1A Bremen had defeated 4A & 5A schools before going into the now defunct Northern State Conference. Now, the symbolism of this lowercase emblem couldn’t be more relevant as Bremen endeavors larger schools and battles in the NIC. When this symbol was first added to football helmets, it was used exclusively for the gridiron. Since then, it has become synonymous with our entire athletic program and can be seen around town on local businesses, etc.   When asked,  “What’s with the number 6 or small b”…..the simple reply is “It’s a Bremen thing”    —Thanks to Throwback Thursday: Class of 1975 for pictures and narrative. 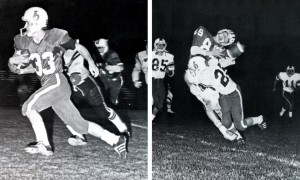