Joey Bailey has signed a letter of intent to attend the University of the Cumberlands located in Williamsburg, Kentucky where he will continue his wrestling career and study Elementary Education and Sports & Exercise Science. Last season, Joey served as team captain and was named Bremen’s Most Valuable Wrestler. As a senior, Bailey finished with a 38-4 record at the 132 pound weight class and a career record of 120-20. He also captured his second All Northern State Conference Championship to go along with a Regional Championship in the IHSAA tournament. Prior to an injury plagued junior season, Bailey won a NSC championship as a freshman and was named Bremen’s Most Valuable Wrestler as a sophomore to go along with a IHSAA Semi-State appearance. In addition to wrestling, Joey played football for Bremen where he was a 2-time Northern State All-Conference linebacker.

“We are very excited to welcome Joey Bailey and his family into the Patriot family! As a multi sport athlete at Bremen High School, Joey has had the opportunity to enjoy several sports and excel with each. At the University of the Cumberlands his focus will be a well blended balance of academics and wrestling. We believe the ceiling is high for Joey in both areas. Joey fits everything we look for in a student athlete and we are excited that he has chosen to spend his college career at UC!” stated Steven Sandefer Jr, University of the Cumberlands Assistant Coach.

Bremen Head Wrestling Coach, Shawn Campbell stated, “Joey spends a lot of time studying the sport of wrestling and his own technique. He works hard during the season. He is very coachable and tries to learn every day. He works hard in the off season to do everything possible to make sure he is ready for the competition season. His leadership and work ethic were unmatched. His willingness to strive for his goals and to do whatever was necessary, allowed him to have a great senior campaign. This season he accomplished a milestone that many, many wrestlers have not, and will not, Joey Bailey surpassed the 100 victory mark to finish with a career record of 120-20! Joey has been a leader, a mentor, a motivator and a friend to many of his teammates. As a coach, you love to see kids like this coming through your program, but you hate to see them leave! I would like to thank Joey for his commitment to Bremen Football and Wrestling! University of the Cumberlands is getting one of the best from Bremen Wrestling! He is going to be very successful in his future and the Bremen Wrestling Family would like to wish him the best!”

Recruiting Consultant, Steve Sandefer Sr commented, “I must say that although I was familiar with Joey Bailey over the past few years, I found his performance at IHSAA Individual Regionals this year most inspiring. Joey had a “magical” day that displayed the true depths of his wrestling ability. He was able to “break” the odds on favorite in the Semi’s and his cool demeanor in the finals match to win a Regional Championship really grabbed my attention. I did not waste much time Monday morning getting contact information and forwarding the recruiting info to the coaches!” 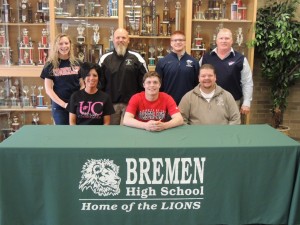